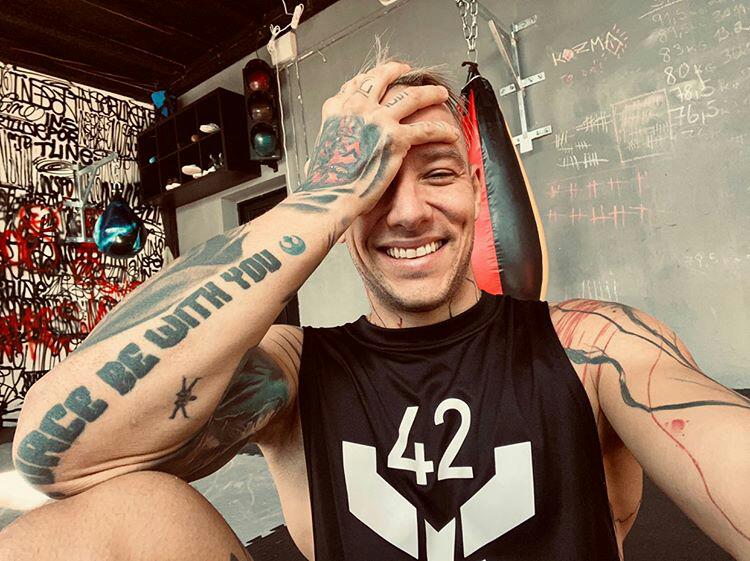 "One does not realize what is behind it. It’s hard to play 4 concerts per weekend, drive in a van and travel thousands of kilometers. Some people think it's a lot of fun, but it's not. One must be extremely fit.“

fitness founder music
He has been involved with music for 18 years, which he proves as a singer of the Skyline band. "I was not at the birth of that band. I was invited to one gig as a 'guest' and I stayed. We did a song together, it somehow clicked and we started to develop further. Then we did another song and another. In the end, I made so many of them that I started feeling stupid to be just a guest there,“ laughs Jacob. He admits that he still keeps his feet on the ground even after many years on stage and sees no reason why fame should change him.

Musician's life is not a walk through a rose garden, as an ordinary person may think. Of course, Jacob knows his stuff. "Life is difficult. One does not realize what is behind it. It’s hard to play 4 concerts per weekend, drive in a van and travel thousands of kilometers. Some people think it's a lot of fun, but it's not. One must be extremely fit and must be able to jump around for 4 hours with minimum sleep. So it's not about just sex, drugs, rock 'n' roll,  when it’s done professionally, "he describes the musician's life.

After a few years, he returned to his other hobby and that was sport. "I played sports all my life, but at some point I started doing even more sports. I started digging more into this area and that resulted in me being a trainer. I started looking for information altruistically. I actually never wanted to be a trainer. Even though it became my job, I didn’t want to pursue this career. I just wanted to understand it more and over time it became my profession, "says the young man.

He is currently working on his own project called Transformers 42. What is it about? "This project was created based on some shows that I shot about exercises such as “Back to the top”, running programs and others. The demand was high and I was not able to fulfill it in any way. So I slowly started creating this program. I started writing down what is important so I can somehow divide my clients into training groups and create tailored meal plans for them. It took 5 years to create it and it got to the point that people have their own online profile basically like on Facebook. This profile is accessible only by clients because they have their information there such as measurements, current weight, weight reductions. Plus they can see their current meal plans, training program and basically get to the tasks for the day with a few clicks, "he described in detail. This project is really embellished in detail even without Jacob having to be physically present as a trainer.

Jacob has also encountered prejudices during his career, but he considers it a normal part of life and does not take them seriously. "In the age of social networks, people have prejudices against everything, so I'm not very disappointed with that. It's such a classic, everyone on the Internet is wise, but it's such a style of communication nowadays, "he says.

The fact that this trainer has some really great ideas can also be seen through his social networks. He thinks that the recipe for being able to create or maintain a successful profile is simple. "You can’t just start liking other people’s photos, writing comments under photos, as they recommend in all those social media courses. It's social, and it's about people wanting to get to know the person, they want to see what the person is like. The person who adds those things about himself creates an image for the public about what he is like. Sometimes the image is distorted, people usually put those beautiful things there, but I think it's important to write sometimes that something or someone annoys you. Express your own opinion and forget how many people will follow. The community the person creates is important, "explains the trainer.
Next article